Since the advent of cloud computing, the popularity of the public cloud has been unmatched. But that could be changing. As Forbes recently reported, 20% of cloud users have moved one or more of their workloads from the public cloud to a private cloud, with an additional 10% planning to make the same migration in the future. Others have decided to bring some of their data back on-premise, taking the hybrid cloud approach. The movement to a private or hybrid cloud approach is called cloud repatriation, and there are a variety of reasons to expect that it may continue.

While you’ll find many small and medium-sized businesses repatriating, it’s the large ones that are making headlines. File hosting service Dropbox, which was created in the cloud and began business in 2007 on Amazon Web Services (AWS), recently moved more than 600 petabytes of data off the public cloud and adopted a hybrid approach. According to Dropbox, the move was able to offer them faster performance and lower costs.

The three main drivers of cloud repatriation include:

Repatriating to a private cloud offers more transparency into pricing structures, and the pay-as-you-go approach allows companies to pay for services much like a utility. With the public cloud, according to Stanford researcher Dr. Jonathan Koomey, companies are wasting $62 billion per year paying for capacity they don’t need. Many companies have over 80 percent more server capacity than needed on-premise, and moving this data to a public cloud means they wind up paying electricity, cooling, licensing and maintenance on unused cloud capacity—an average of over 35 percent. In addition, large public cloud providers such as AWS and Azure revise their pricing structure often, causing confusion. Plus, with pricing always in flux, it can be difficult to determine usage and cost over time. In fact, AWS has made 62 changes to their pricing structure in 12 years, making it difficult for companies to plan a long-term approach to the cloud.

While a public cloud environment does offer some level of control over resource utilization, the shared nature of the public infrastructure leaves some elements up to the public host, which can make organizations (and their CIO) wary. Alternatively, a private cloud is designed to be consumed by a single organization that retains the ability to configure and manage resources without the restrictions that might be imposed in a multi-tenant solution that shares resources.

Many businesses are within industries that have compliance regulations. There are industry regulations such as PCI DSS for businesses collecting payment, CJIS compliance for government agencies dealing with background history and fingerprints, and HIPAA for protecting the healthcare data of patients. To meet these requirements and reduce the chance of an attack from hackers or damage from natural disasters, companies are putting their most sensitive data into a private cloud. A reputable private cloud provider will ensure an “always secure” IT network is maintained.

This includes regular testing of network vulnerability, regular assessments to identify non-compliant areas, and more. In addition, being compliant means knowing where your data is housed; with a private cloud provider, you always know where your data is located. In fact, you can visit the data center and see your servers in action.

Something that organizations should be aware of when moving from a public cloud, or to one; while some public cloud providers make it easy to move your data into their cloud, they can make it extremely difficult to remove your data from their cloud. We call it the “Hotel California” effect, because as the Eagles put it in 1976, “you can check out anytime you like, but you can never leave.” Rather than just hand over your data, they may hold it hostage, requiring thousands, or even tens of thousands of dollars for its safe return.

Even worse? Some public cloud software, such as NetSuite and Salesforce, never return the data; at least, not in a usable format. Instead, you may get an excel export of data that’s impossible to work with, requiring it to be rebuilt. Unfortunately, this is all they’re required to do if you read the fine print.

If you’re planning to repatriate some, or all, of your workloads from a public cloud to a private cloud, contact the experts at DSM. We can make the process seamless, without the fine print! And, if you want to learn more about the “Hotel California” effect, our Founder and CEO, David Robinson, recently held an informative webinar on the subject that you can listen to now. 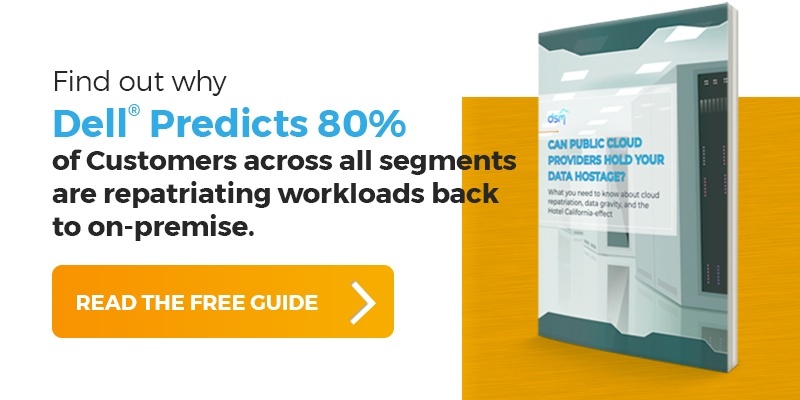 Is a Private Cloud the Same as a Virtual Private Cloud?
When it comes to the cloud, there’s bound to be some confusion. As technology ...

Repatriating from the Public Cloud- Azure Edition
Sometimes, even IT experts have trouble understanding the complexities of the ...

Hotel California: Can the Public Cloud Hold Your Data Hostage?
What does the cloud and the song "Hotel California" have in common? Well, even ...
Leave a Comment

Get the IT Solutions Blog Today!

What People are Saying about DSM

"Because the last issue I encountered, Tim Messing was extremely helpful and diligent. He made himself available when needed and followed up timely. This guy is a very good asset for your company."

"Thought is was appropriate. You have lost some really good techs over the years that we really enjoyed working with and had to rebuild the trust due to turnover."

"Have always been top-notch with service."

"Daniel was great to work with and he was able to figure out a solution to our panic situation. Yay!!! You all are fantastic. I look forward to working with you again on a new back up system."

Great service, setup was great, product is great so far, I’m 100% satisfied at this point.

"No one is perfect. DSM provides knowledgeable staff and support for my organization. They help schedule tasks and bring experience."

"Prompt, excellent service as usual. Thank you Connohor and team."

"My experience with DSM was very beneficial to our environment and they have a unique talent for presenting solutions that speak to our staff and upper management in a clear and concise manner. Making requests for assistance easier to process."

Optimizing your move to the cloud is our primary objective. Our bundled and customized solutions put you on an operationally and financially safe path.